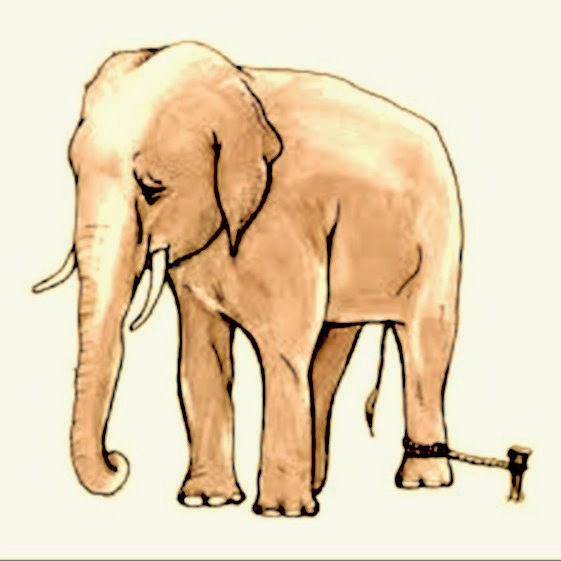 A man was passing some elephants and he suddenly stopped, confused by the fact that these huge creatures were being held by only a small rope tied to their back leg. No chains or no cages. It was obvious that the elephants could, at anytime, break away from their bonds but for some reason, they did not.

He saw their trainer nearby and asked why these animals just stood there and made no attempt to get away. “Well,” trainer said, “when they are very young and much smaller we use the same size rope to tie them and, at that age, it’s enough to hold them. As they grow up, they believe the rope can still hold them, so they never try to break free.”

The man was amazed. These animals could at any time break free from their bonds but because they believed they couldn’t, they were stuck right where they were.

Ever been guilty of this?  Most of us have at some point.

Many of us in sales either consciously or subconsciously hold on belief we can’t do something because we failed at it at some point in the past.  As a result, we avoid or resist being put in a position to do it again.  Worse, we sometimes undertake the activity, but with a negative mindset which often dooms us to failure.  Failure is a necessary part of learning – if you avoid failure, you inhibit your growth.   Failure only becomes an issue if you don’t learn from it – so by not doing something because you failed at it once – what are you learning?

What we can fail to take in to account is, like the elephant, our skill set and aptitude has likely grown and now we are actually able to do that which we previously failed at.  We allow our fear of failure to outweigh our rational thought we can do it.

Children exhibit this all the time – and, as parents, we support our children through this to show them that they can do it.  We know they can do it, we know they actually don’t need our help, but we stand by them.  Not necessarily to provide help, but to provide confidence and reassurance.  Slowly, over time, they stretch and break that rope.  As a sales manager, it is important to understand this as sales people can and do exhibit the same mindset around certain tasks.

Next time you find yourself saying you can’t, won’t or shouldn’t do this – ask yourself why you think this and whether it is actually true.